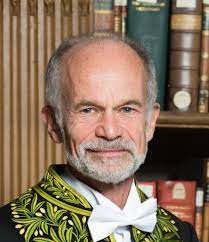 Professor emeritus of the Sorbonne Université

Mathematician and philosopher, member of the French National Order of Merit

Trained in mathematics and philosophy in Paris (thèse d’Etat, 1975) and at UC Berkeley (PhD, 1973), where he held a Harkness fellowship, Daniel Andler taught mathematics before moving to positions in philosophy.  From 1999 until becoming emeritus in 2015, he was the chair of philosophy of science and epistemology at Université Paris-Sorbonne (Paris IV) — now Sorbonne Université. He is is an honorary member of the Institut universitaire de France. In December 2016 he was elected to the Académie des sciences morales et politiques.
He is interested in the foundations of cognitive science and the import of this field on our understanding of human affairs and the role of philosophy. He has worked on specific issues concerning models of the mind, the role of context, and reasoning. He defends a minimal version of naturalism, with the aim of articulating cognitive science with the social sciences. He is also engaged in a number of more applied projects concerning the use of scientific knowledge in policy issues and the transformations of education brought about by advances in cognitive science and information technologies. He has published extensively in philosophy of science and on the foundations of cognitive science. His most recent book, La Silhouette de l’humain, came out in 2016; in 2018 he co-edited textbook in cognitive science. The recent surge of interest in Artificial Intelligence has prompted him to return to this topic with an essay  due to appear in 2022.
Daniel Andler founded and directed a number of institutions, among which the Department of Cognitive Studies (DEC) at Ecole normale supérieure, the research team “Sciences, normes, démocratie” within Sorbonne Université, the learned society Société de philosophie des sciences (SPS), the master’s program in cognitive science — the so-called Cogmaster —(ENS-EHESS-Universite de Paris), the Compas group, a think-tank within DEC, dedicated to exploring the synergies between cognitive science and ICT in education. He was a founding member of the European Society for Philosophy and Psychology (EuroSPP), and was until recently the director of the web journal Lato Sensu. Within the Académie des sciences morales et politiques, he has recently launched a 3-year project, (TESaCo) funded by Fondation Simone et Cino Del Duca, which aims at exploring and developing means of exercising collective intelligence to harness the emerging (digital, bio, nano…) technologies.

How does the "digital sphere" — the whole of digital information and communication technologies — influence the shaping and perception of crises? While still poorly understood, its influence...