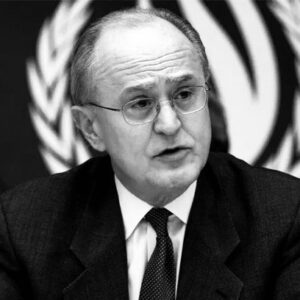 Trained as a political scientist, Professor Ruggie has made significant intellectual contributions to the study of international relations, focusing on the impact of economic and other forms of globalization on global rulemaking and the emergence of new rule-makers. He is a Fellow of the American Academy of Arts & Sciences, the recipient of a Guggenheim fellowship, and awards from the American Political Science Association, International Studies Association, and the Berlin Social Science Center. Surveys published in Foreign Policy magazine have identified him as one of the 25 most influential international relations scholars in the United States and Canada.

In addition to his academic pursuits, Professor Ruggie has long been involved in practical policy work. From 1997-2001, he served as United Nations Assistant Secretary-General for Strategic Planning, a post created specifically for him by then Secretary-General Kofi Annan. His areas of responsibility included assisting the Secretary-General in establishing and overseeing the UN Global Compact, now the world’s largest corporate citizenship initiative; proposing and gaining General Assembly approval for the Millennium Development Goals; and broadly contributing to the effort at institutional reform and renewal for which Annan and the United Nations as a whole were awarded the Nobel Peace Prize in 2001.

In 2005, Annan appointed Ruggie as the UN Secretary-General’s Special Representative for Business and Human Rights, tasked with proposing measures to strengthen the human rights performance of the global business sector. In June 2011 the UN Human Rights Council, in an unprecedented step, unanimously endorsed the “Guiding Principles on Business and Human Rights” that Professor Ruggie developed through extensive consultations, pilot projects and research. Core elements of the Guiding Principles have been adopted by other international standard setting bodies, national governments, business enterprises, and FIFA, the global governing body of football. For this work, Professor Ruggie received awards from the American Bar Association and the Washington Foreign Law Society, the latter honoring “an individual who has made an outstanding contribution to the development and application of international law.”

John Ruggie chairs the board of the nonprofit Shift, which advises governments, companies and civil society on business & human rights issues. He is a member of the corporate board of Arabesque Asset Management and of Unilever’s Sustainable Living Plan advisory council. His book Just Business: Multinational Corporations and Human Rights, has been translated into Chinese, Japanese, Korean, Portuguese and Spanish.