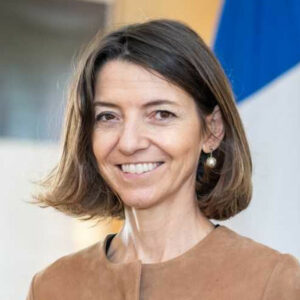 Minister of State for Europe
Share this author page

Laurence Boone is an economist with a PhD in Applied Econometrics from the London Business School (United Kingdom), an MSc in Econometrics and Macroeconomic Modelling from Reading University (United Kingdom); a Master’s Degree in Economics from Université Paris X Nanterre (France) and a postgraduate diploma (DEA) in Modelling and Quantitative Analysis from University Paris X Nanterre (France).

She has worked in economics research centres, including the French Government’s Centre for Prospective Studies and International Information (CEPII) and the OECD; she was Chief Economist at Barclays Capital France from 2004 to 2011, and Chief Economist and Director-General of Bank of America Merrill Lynch Global Research from 2011 to 2014.

In 2014, the President of the French Republic appointed her as Sherpa and Special Adviser for multilateral and European economic and financial affairs.

In 2016, she was Chief Economist for AXA Group.

In 2018, she became Chief Economist of the Organisation for Economic Co-operation and Development (OECD). She directed research for the OECD’s Economics Department, represented the OECD for economic and financial affairs and took part alongside the Secretary General in meetings of the International Monetary and Financial Committee as well as G7 and G20 meetings.

In January 2022, Laurence Boone became Deputy Secretary-General of the OECD, in addition to her position as Chief Economist. She oversaw the analysis and drafting of public policies in the areas of employment, labour and social affairs, education, skills and well-being, inclusion, sustainability and equal opportunities. She also directed research for the Inclusive Forum on Carbon Mitigation Approaches.

Laurence Boone was appointed Minister of State for Europe on 4 July 2022.

Over the past several years, the theme of “European sovereignty” has emerged in the European debate. There is still some misunderstanding about the concept and even the exact diagnosis it represents is often debated. And yet, despite being shaken by external crises for the past twenty years — the 2008 financial crisis, followed by the … Continued