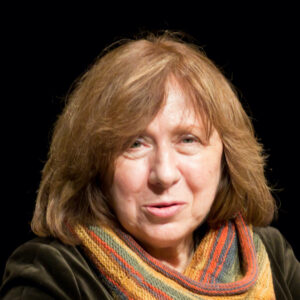 Svetlana Alexievich was born in Ivano Frankivsk, Ukraine. Her father was Belarusian and her mother Ukrainian. Alexievich grew up in Belarus, where both her parents were teachers. She studied to be a journalist at the University of Minsk and worked a teacher, journalist and editor. In Minsk she has worked at the newspaper Sel’skaja Gazeta, Alexievich’s criticism of the political regimes in the Soviet Union and thereafter Belarus has periodically forced her to live abroad, for example in Italy, France, Germany and Sweden.

Svetlana Alexievich depicts life during and after the Soviet Union through the experience of individuals. In her books she uses interviews to create a collage of a wide range of voices. With her “documentary novels”, Alexievich, who is a journalist, moves in the boundary between reporting and fiction. Her major works are her grand cycle Voices of Utopia, which consists of five parts. Alexievich’s books criticize political regimes in both the Soviet Union and later Belarus.