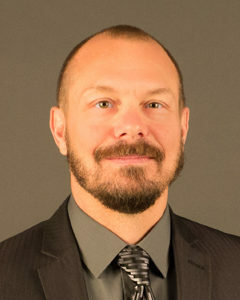 Troy Bouffard is Director of the Center for Arctic Security and Resilience at the University of Alaska, Fairbanks. He has also been a full time faculty member since 2015 and is the designer and instructor for the Arctic Security graduate concentration and graduate certificate in the Master of Security and Disaster Management (MSDM) program.

Troy Bouffard formerly served in the U.S Army and since 2013 has acted as a defense contractor. In this capacity he is the co-investigator and program manager of the USNORTHCOM / ALCOM Arctic Defense and Security Orientation (ADSO) program. He also serves as Network Coordinator for the North American and Arctic Defense and Security Network and was an Analyst in Arctic Policy and Affairs at The Center for the Study of Security, Hazards, Response, and Preparedness (C-SSHRP) from 2013-2020. Between 2011-2012, Mr. Bouffard was Legislative Staff and the Chief of Staff to representative Bob Miller in the Alaska State Legislature.

Troy Bouffard holds a bachelor’s degree in Political Science and a master’s degree in Arctic Policy from the University of Alaska, Fairbanks and is currently completing a PhD in Russian Federation Arctic Defense and International Strategy.