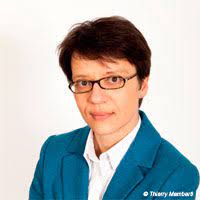 Elisabeth Grosdhomme is a graduate of the École normale supérieure (ENS) (1985), Sciences Po Paris (1987), École national d’administration (ENA) (1991) and agrégée in Modern Languages (1988). She is also a director of several companies. In recent years, Elisabeth Grosdhomme has also served on several government commissions.
She began her career at the General Inspectorate of Finance (1991-1994), then joined the Prime Minister’s office (Edouard Balladur, then Alain Juppé). She headed the marketing and external communication department of INSEE (1996-1998). She was a lecturer at Sciences Po Paris, at the Conservatoire national des arts et métiers (Cnam) (1995-1999) and an affiliated professor at the École Supérieure de Commerce de Paris. She was also a director of Uni LaSalle (2014-2018) and chaired the Board of Directors of the École nationale supérieure de création industrielle (ENSCI) (2012-2014).

LEADING AMIDST CHAOS – How to Stay Agile When the Crisis Takes on New Dimension? With Elisabeth Grosdhomme

What is the main cause of blindness to the emergence of crises? More than the actual occurrence of the event, which is often well anticipated, it is the...