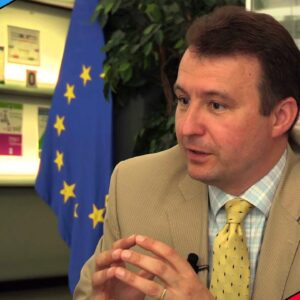 Deputy-Director General responsible for nuclear energy, safety and ITER at the European Commission

Jan Panek is Deputy-Director General responsible for nuclear energy, safety and ITER at the European Commission.

Priori to his current position, Jan Panek was Head of Unit dealing with retail energy markets coal and oil in the Directorate-General for Energy of the European Commission. He joined the European Commission in 2005 following an earlier career in the diplomatic service of the Czech Ministry of Foreign Affairs during which he occupied positions in the Ministry’ headquarters as well as in Czech diplomatic missions in Tokyo and Brussels. He also spent several years in the 1990s with the Boston Consulting Group in its London and Central European offices. He holds a B.Sc. in Applied Geophysics from Charles University in Prague and an M.A. in International Economics/A.F.P. from The Johns Hopkins University -S.A.I.S.in Washington, D.C. He is also a Chartered Financial Analyst (CFA) charter holder.

The Geopolitics of Nuclear Energy

On December 16th, the GEG Weekly Seminar will discuss the geopolitics of nuclear civil energy. The discussion will be based on a paper written by Mathilde Teissonnière in...

Speakers: Dirk Buschle , Rachel Kyte , Teva Meyer , Jan Panek
Partners: The College of Europe, The European Institute at Columbia University, The Europe Center at the University of Cambridge, The School of Transnational Governance at the European University Institute
Learn more