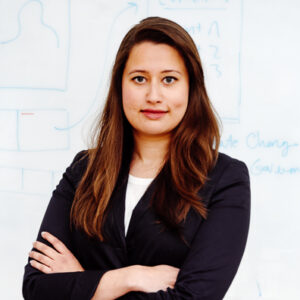 Dr. Garima Mohan is a fellow with the Asia program at the German Marshall Fund of the United States where she leads their India portfolio and heads the India Trilateral Forum. She is also a non-resident fellow with the Global Public Policy Institute (GPPi) in Berlin.

Dr. Mohan’s work focuses on Europe-India ties, EU foreign policy in Asia, and security in the Indo-Pacific. She previously  was a research fellow at GPPi, where she led the institute’s work on the global order, and focused on the foreign and security policy of rising powers, including India and China. She was also the scientific coordinator for the EU’s Asia-Pacific Research and Advice Network (APRAN), which supports EU policymakers on issues concerning the Asia-Pacific, and headed the EU-India policy dialogues on global governance and security. She has extensively published on a variety of issues, including Indian foreign and security policy in Africa, connectivity projects in Asia, maritime security in the Indian Ocean, EU-India relations, and Germany-India ties.

In 2017, Dr. Mohan participated in the Asian Forum on Global Governance organized by ZEIT-Stiftung Ebelin und Gerd Bucerius and was a 2017 Raisina Young Fellow. From 2013 to 2015, Garima Mohan was a fellow with the NFG Research Group ​“Asian Perceptions of the EU” at the Freie Universität Berlin.

She holds a PhD in political science from the Berlin Graduate School for Transnational Studies – a joint program of the Freie Universität Berlin, the Hertie School of Governance, and the Berlin Social Science Research Center. She also holds a master’s degree in global politics with distinction from the London School of Economics and a bachelor’s degree in history from St. Stephen’s College in New Delhi.

13 international experts from the four corners of Europe and beyond take a stand on the state of transatlantic relations following the withdrawal of Afghanistan and the AUKUS alliance.