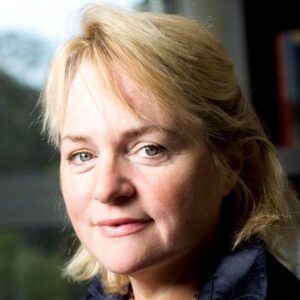 Kalypso Nicolaidis is a Professor in the School of Transnational Governance and Professor of International Relations at Oxford University. She has also been an associate professor at the Kennedy School of Government at Harvard. She is Chair of Southeast European Studies at Oxford and is a member of the Board of the European Council on Foreign Relations.

In 2012 and 2013, she was an Emile Noel-Straus Senior Fellow at NYU Law School. Between 2008 and 2010, Kalypso Nicolaïdis was a member of the Gonzales Reflection Group on the Future of Europe 2030, created by the European Council. She has also been an advisor on European affairs to George Papandreou in the 1990s and early 2000s, the Dutch government in 2004, the British government, the European Parliament, the European Commission, the OECD and UNCTAD.

Kalypso Nicolaïdis is the author of numerous articles on international relations, global governance, business ethics, the promotion of law and democracy, and the internal and external aspects of European integration.

On the same weekend in December 2021, two simultaneous events spoke radically differently on the conundrum of our age. Both were engineered by ‘the West’, one by Biden’s United States, the other by the European Union (the ‘EU’). Both were framed as ‘kicking off’ a process of democratic renewal at home and abroad, a response … Continued

Is the Conference on the Future of Europe a success?

On February 3rd, the GEG Weekly Seminar will discuss the Confonerence on the Future of Europe and assess whether this new political initiative has bear fruits. The starting...