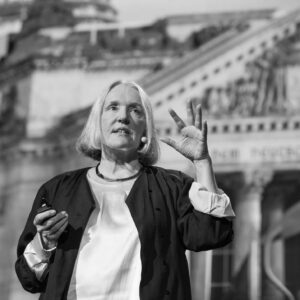 Saskia Sassen is the Robert S. Lynd Professor of Sociology and Co-Chairs The Committee on Global Thought at Columbia University in New York.

Saskia Sassen studies globalization and the sociology of the world’s large cities, immigration, and States in the global economy, with a particular focus on inequality, sexism, and digitization. She coined the term ‘Global City’ in her 1991 book of the same name. She has authored or co-authored eleven other books which have been translated into over twenty languages. Her writing has been featured in The Guardian, The New York Times, Le Monde Diplomatique, Le Monde, Vanguardia, Clarin, Die Zeit, Newsweek International, The Financial Times, among others.

She studied Sociology and Economics at the University of Notre Dame and holds a master’s degree in Philosophy from the University of Poitiers in France and a PhD from Notre Dame University. She has received many awards and honors, among them twelve doctor honoris causa, the 2013 Principe de Asturias Prize in the Social Sciences, election as a Foreign Member of the Royal Academy of the Sciences of the Netherlands, and was made Chevalier de l’Ordre des Arts et Lettres by the French government.