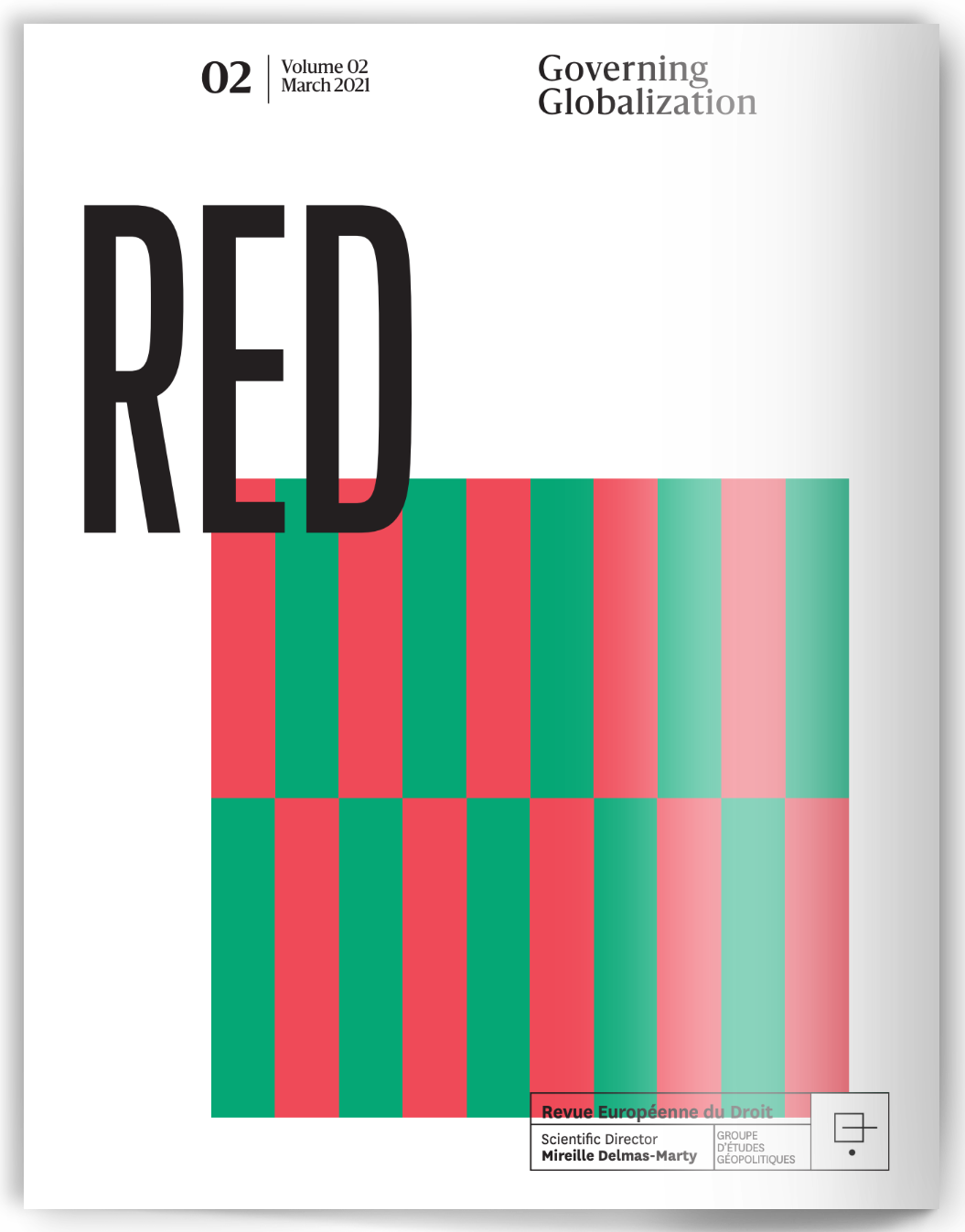 At a first glance, it might seem anachronistic to write about global governance, since the era of grand universalist declarations, globalizations of trade and transnational agreements is on the brink of being replaced by that of rediscovered national interests, isolationisms and the selfishness of the “Me First” politics. The crisis – or perhaps the polycrisis – in which we find ourselves, as a result of the emergence of economic interdependencies uncoupled from the bonds of solidarity, is above all the reflection of a certain form of globalization, characterized by a structural fragility inherited from profound and precipitous transformations. A new world is already under way, a heterogeneous, unstable and unpredictable amalgam, whose features and fault lines could not have been anticipated. This trend is apparent in the new protectionisms and the crisis of multilateral cooperation, but also in the emergence of numerous alternative but sometimes incompatible political, social and economic models.

Global challenges are multiplying, whether related to current and future pandemics, migratory crises, the fight against crimes against humanity, financial and social crises, tax evasion, or the ambivalence of powerful new technologies, to cite but a few. Together, these challenges, which show a humanity able to threaten its own future, create, in fact, an (involuntary) community of fate. Whether one likes it or not, they call for a global concertation and, without doubt, a break with nationalist reflexes in favor of new rules of coexistence between different communities. Rather than a denial of these inescapable realities, the current polycrisis is an opportunity to question, before a new acceleration, the concepts underlying the unflappable race towards an increased globalization.

It seems necessary, in this regard, to acknowledge the growing inadequacy of traditional legal thinking. In the absence of a comprehensive shared ideology underpinning the multiple, disparate and fragmented normative spaces, our societies are still seeking an appropriate legal narrative, able to both reflect and tame them, while avoiding the twin pitfalls of the “great collapse” and of the “great enslavement”.

Indeed, globalization is far from being limited to international trade, and calls therefore for new rules of coexistence between heterogeneous political communities, without any hope that relevant normative guidelines (the “North Pole”) could arise out of the traditional “hearths” of shared values. During the bygone era of national communities, arising out of both shared memories and common oblivions, collective agreements and disagreements seemed to shape legal rules and structure political institutions, stabilized by shared (albeit evolving and sometimes imposed) values and interests. These “national compasses” became increasingly ephemeral; today, they are disappearing one after the other, under the pressure of the corrosive forces of globalization, unable to meet the challenges that humanity faces as a whole. Without a new compass, humanity travels like a “drunken boat”, carried by the four winds of the Earth, nostalgic of a vanished memory and of undefinable common values. So, where can be found the tools for such a reconstruction, and how can we reinvent a form of global governance fitting for all the parties?

Without doubt, reflections about a “global” law are not new. They are apparent in theories seeking to construct a global constitutionalism, a global administrative law, or a transnational non-State legal order. None of these (multiple and diverse) projects have yet succeeded, and their struggles testify to the inherent tensions, even irrationality, of any attempt to rely on well-ordered legal categories, stemming from idiosyncratic histories and memories, in order to understand and act in a world that is fundamentally disordered, interactive, unstable and non-hierarchical.

In other words, the complexity of these unprecedented challenges, as well as the diversity of lifestyles and particular interests, make legal transplants, or extrapolations of national solutions to the global level, ineffective and, above all, inappropriate.

The two pitfalls of globalization, the hegemonic order of a universal monarchy, what Kant called “despotism”, on one hand, and the great disorder of a world that is not only divided, but fragmented, on the other, can only be avoided through a contextualized universalism, where legal rationality would not provide «ready-made’ solutions, but rather the tools for a rational deliberation and cross fertilization, able to create unity out of plurality. In other words, acknowledging that diverging national legal systems cannot be unified and replaced by a single model, a true global governance of the commons, if possible, can only be plural and unstable, hybrid and flexible.

On closer inspection, this call for a plural governance is merely the reflection of a common practice, that of the legal “tinkering” engaged in by the actors of globalization, that is to say, the attempt to “globalize” national legal orders through harmonizations rather than unifications, and to “contextualize” international norms by adapting them to local circumstances. Its incarnations are numerous.

This effort of mutual tolerance is apparent, for instance, in private international law, where the operations of qualification and recognition are based on the acknowledgement of a certain proximity of legal concepts and institutions, beyond the diversity of their national manifestations, provided, however, that such operations do not offend the fundamental principles (or the international public order) of the “recognizing” authority, in other words, that the latter can accommodate in its national legal order the foreign concepts and institutions without thereby denying its own core values.

A similar story can be told about the methods used in the implementation of international instruments when any uniformization is unfathomable. Such is the case of the so-called “functional equivalence” method, building on a fruitful mix of legal realism and systemic functionalism. When the OECD took the initiative of a Convention on Combating Bribery of Foreign Public Officials, its drafters, aware of the deep divergences between the legal cultures of member states in criminal matters, limited themselves to defining a system of basic principles and turned to this notion of functional equivalence in order to allow for a margin of national adaptation, without requiring uniformity and without threatening the fundamental principles of national legal systems (for instance, with respect to the criminal liability of legal persons).

In this regard, the equivalence between national measures is both a method and an objective, the success of which depends on successful monitoring and control of national implementations, both the law “in the books” and as applied in practice.

Another example, in the field of human rights, is the concept of a “national margin of appreciation”, which was originally absent from the ECHR, but which was introduced by the European court early on: in cases where restrictive or even derogatory measures are authorized under the Convention to protect national public policies, judges take into account the context (e.g., cultural, social, economic) of each State in order to relax the requirements of a uniform application and thus preserve the principle of subsidiarity.

These instances show that harmonizing the divergences (in a bottom-up way, from the local to the global level) and contextualizing the universal (in a top-down way, by diversifying it from the global to the local) does not mean abandoning all axiological rationality. Indeed, plural governance relies, first of all, on a set of guiding principles that must be respected in order to acknowledge the proximity beyond the diversity.

One can find traces of this search for guiding principles in the long (but somewhat overlooked) tradition of the ius gentium of Roman antiquity, supposed to reflect the requirements of natural reason, that is, the needs common to all humans as rational beings. The tradition continued in the Middle Ages through the ius commune, the result of a hybridization of Roman law, canon law and lex mercatoria, applied as a method of reasoning and a guide to the interpretation of diverse and complex local norms.

This last point leads us to another dimension of a plural global governance, which requires that formal validity, a notion intertwined with the definition of common standards of deliberative rationality, be combined with an axiological validity tolerant of divergent approaches, insofar as they are mutually comprehensible. It also implies procedural requirements, aimed at ensuring that the final decision, whatever its content, is rationally acceptable: fair representation of the parties, transparency in the motivation of decisions, rigor and coherence in the use of weighting methods, as well as, where appropriate, respect for reliable scientific data.

These are the sine qua non conditions of a rational deliberation, which substitutes contextualization for uniformity and compatibility for pure and simple conformity, without falling into arbitrariness, based on an updated formalism relying on non-classical logics, such as fuzzy logics or topology (the logic of neighborhoods).

It is in this sense that plural governance could allow for the emergence of a narrative of humanity as a common adventure, in search of a “dynamic balance” that would stabilize societies in their reciprocal relationships without rigidifying their differences, or, in short, would pacify humans without subjecting them to a standard model. In this respect, the European project is undoubtedly one of the most ambitious laboratories that we have at our disposal for observing and testing the emergence of common solidarities. It is only because Europe is fuzzy that it might perhaps succeed in creating a true ordered pluralism. Valuing the best of each national tradition through reciprocal borrowings (the office of the European Public Prosecutor is an example), a sovereign Europe could thus invent a sovereign order that is neither authoritarian nor uniform, but democratic and pluralist.
This “utopia” is all the more feasible that the European Union is also trying to invent another way of governing through the law, not only by separating powers, but by aggregating levels of organization (State, infra– and supra-State levels) and categories of actors (public and private, such as multinational corporations, as well as civic and scientific actors), in a governance that is still regional, but that is already substituting interactive and evolving, and therefore complex, relations to the hierarchical and stable relations of the nation-State. It is in this sense that the idea of European “sovereignty” must be understood: if the construction of a “sovereign, united and democratic” Europe enables politics to regain its “capacity for action” in the context of globalization, it is due to the passage from a solitary sovereignty, protected but also enclosed within its borders, to a sovereignty based on solidarity, a sovereignty that is open and augmented, aiming to protect, beyond national interests alone, true global common goods.

The taxation of the digital economy provides an excellent area for observing the attempt to govern globalization by way of legal tools as well as the difficulties in making such a perspective concrete. On one hand, the incomprehension caused by the low level of taxation of large companies in the digital economy in jurisdictions where … Continued

In the spiral of humanisms

The instability of our societies multiplies the crises (socio-economic, migratory, climatic, sanitary…) which are intertwined in a single poly-crisis, piling up states of emergency, from the terrorist attacks of 2001 to the pandemic of 2020, while a kind of normative madness takes hold of our societies. We must abandon the usual metaphors of legal systems … Continued

Geopolitics of the Energy Transformation

1. The internationalisation of energy transactions The history of energy can be written from myriad perspectives, depending on the object emphasised in each account. A household, a river, an activity, an event, a specific resource, a given technology, a country, a region, a global process or combinations thereof are some of the objects around which … Continued