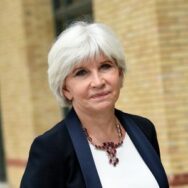 Director of the European Climate Foundation (ECF), Founder of IDDRI
Share this article 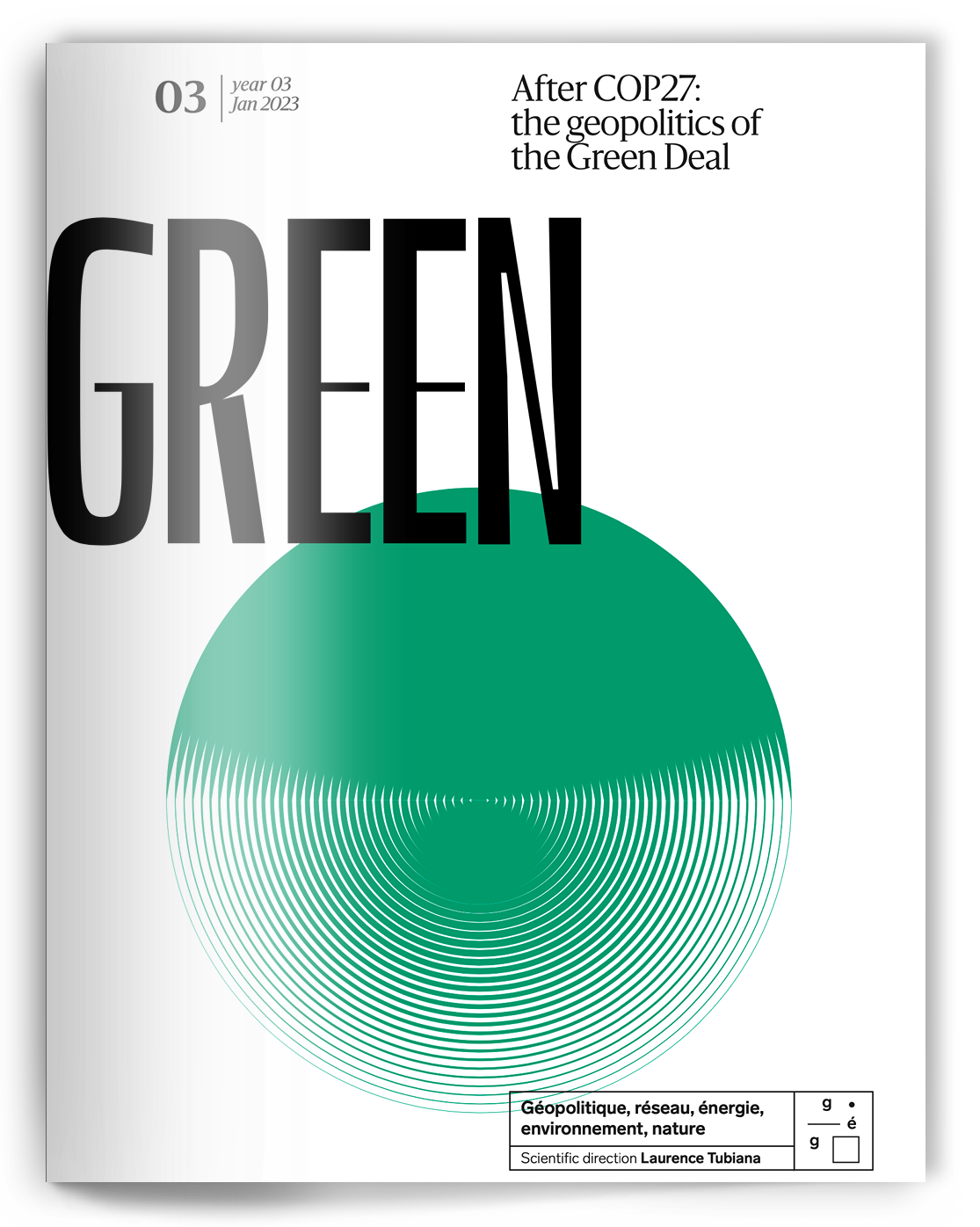 GREEN is published by Groupe d'études géopolitiques, with the support of the Fondation de l'École normale supérieure

After Cop 27: Geopolitics of the Green Deal

Winter, 2022: The geopolitical “interregnum” 1 that we are living through is bringing with it readjustments that have previously been considered impossible. Two major parts of the Paris Agreement that had lacked means of implementation since 2015 were resolved at the COP27 in Egypt, which was beginning under the worst auspices.

For more than thirty years, vulnerable nations have been demanding recognition of the “loss and damage” — climate convention jargon for the costs of the impacts from climate change — they are experiencing. For thirty years, the nations who emit the most have resisted acknowledging their individual responsibility. It was in Sharm el-Sheikh that a diplomatic alignment which had always seemed highly unlikely suddenly emerged, driven by Europe and a willingness on the part of the United States that was unthinkable for American legal experts until very recently.

This marks a tipping point. While multilateral governance is struggling to structure our responses to the “polycrisis” described by Adam Tooze, member of this revue’s scientific committee, including the catastrophic realities of climate damage, new nodes and connections are appearing, hinting at much more far-reaching realignment to come, with the challenge of integrating climate justice into its institutions. This climate justice, the mention of which was ripped away in the final hours of the Paris Agreement, has finally entered an implementation phase.

The other improbable result of this COP is the implementation of article 2 of the Paris Agreement which involves a complete overhaul of the international financial system. This reform has been mentioned countless times and has been the subject of a large number of G20 reports and meetings, but always pushed off until later. It was in Sharm el-Sheikh, under the leadership of Mia Mottley, Prime Minister of Barbados, in light of the impasse over funding for reducing greenhouse gas emissions and the necessary adaptation to the changes that are already underway, that countries agreed to launch this reform. This “Bridgetown Initiative” — an updated version of which was published on the pages of this review ahead of COP 27 — that was launched in Barbados and that President Macron has endorsed, brings attention to a complex climate governance — a regime — which has, since the Paris Agreement, reorganized institutions well beyond the COPs. The necessary responses are of such magnitude that the different negotiation and regulatory frameworks are communicating with each other and becoming entangled, clouding the traditional institutional mandates: from central bankers who, through a spillover effect, see their mandates for financial stability being extended to climate risks, to local governments, cities or states, who are freeing themselves from delegating power to a higher level in order to apply the rules of an agreement to which they are not signatories.

It is in this context that I was given this opportunity, with this third volume of GREEN, to outline a response to the following challenge: to give an overview of the geopolitics of the European Green Deal. This is a difficult exercise in a volatile situation of war and emergency. 2 The final result is a kind of snapshot that helps us to isolate this paradox and look beyond the limits of our structures of governance.

For example, this volume of GREEN allows us to analyze the expectations placed on the COPs. Some of the texts pre-date the developments of the Sharm el-Sheikh conference. With this perspective, the interview granted to us in September by Frans Timmermans — who was one of the summit’s most visible protagonists and who was able to embody a Europe of climate action as it had rarely been in the past — is even more relevant now. My exchange with Vanessa Nakate highlights another essential element of these events: as imperfect as they may be, they remain a unique phenomenon in global governance for the role they can accord to civil society, to young people, and to a powerful new convergence of demands that I will call eco-feminism. In this regard, and as many feared, this COP27 was a disappointing failure on the part of the Egyptian presidency for respecting the role of civil society.

We are publishing in these pages the contribution of Avinash Persaud, architect of the Bridgetown Initiative, whose proposals promise to stimulate one of the most consequential debates over global governance in the last few decades. From the concept of climate damage, to the issue of the share given to debt in our macro-economic systems, to the need for a new form of taxation on fossil fuel profits, this is the most comprehensive expression to date of the Bridgetown proposals. It is a reference text that has the potential to profoundly mark the year to come, as well as the special summit announced for mid-2023 by French President Emmanuel Macron.

Rather than simply offering an atlas of the Green Deal in relation to various geographies of the world, it seemed important to me to offer, through the following expert opinions, a vision based on different scales. All are rooted in Europe: whether its diplomacy, its trade, its security, its agricultural strength, or its villages. These multi-scale perspectives revisit or contest the notions of geopolitics and sovereignty. All these perspectives assert forms of legitimacy that are not solely linked to the definition of a state or the European Union, and yet are reinforced by the implementation of the Green Deal. It is in this spirit that we are re-publishing “The Green Deal is The New Social Contract”, which was published before the invasion of Ukraine in the pages of Grand Continent, with a new introduction that revisits this position in light of the war.

One of these intersecting scales is that of legal action, creating spaces for asserting and legitimizing climate issues at multiple levels. Marta Torre-Schaub describes a phenomenon in which the Paris Agreement continues to play a transformative role, particularly in the development of European climate law and its global reach.

Other, local scales are also central: Paul Magnette, mayor of Charleroi, paints a dynamic portrait from the frontlines of cities as powerful democratic tools for climate and social action. Fanny Lacroix, mayor of Châtel-en-Trièves, which is at yet another scale, offers us a reflection on rural villages: these communities represent a large majority of the European territory, and they are an essential test for the Green Deal’s credibility. This test can be seen in the “right to the village” proposal, a sort of right to contribute and to reconcile the individual’s field of action in their relation to these global scales, and a right of the citizen to see the world and their local community in the same movement. Céline Charveriat offers us the opposite approach, giving us the account of a Green Deal which would be above all, for the time being, a missed opportunity between the Brussels institutions and citizens.

In terms of the formal geopolitical matters, one of the most transformative events of this past year is, without a doubt, Lula’s return to power in Brazil. His former Minister of the Environment, Izabella Teixeira, generously granted us an interview in the days after the results as she was preparing to accompany the president’s delegation to the COP. Bernice Lee and I co-authored an analysis of Europe’s role in the balancing of climate ambition within the US-China tensions. Pascal Lamy and Genviève Pons, for their part, have drawn up an essential overview of the challenges of environmental protection within European trade relations. Sébastian Treyer questions the notion of “non-alignment” which has marked geopolitical debates since the Russian aggression in order to situate European diplomacy within a web of challenges — both in terms of climate and finance — and the relations that must be maintained with African countries in particular.

The “polycrisis” is, fundamentally, a crisis of security concepts. As such, I have brought together three perspectives that enrich our thinking on this topic. Olivier de Schutter, drawing on his experience as United Nations Special Rapporteur on extreme poverty and — in his previous mandate — on food security, gives us an essential analysis of Europe’s role in the creation of a sustainable agro-ecology in the service of food security. Mary Kaldor proposes ways to integrate the notion of human security within NATO and EU structures. In the sometimes stifling shadow of institutions and processes, there are lives and a fragile human society, in its relationship with biodiversity and the earth.

I am also pleased — and moved — to conclude this volume with a very lovely interview with Bruno Latour from June 2018, Down to Europe.

“The global leads us astray”, Bruno said at the time, summarizing the intention of this introduction. We have no choice but to find our way back.

Autumn 2021: for avowed climate activists — of which I am one — this is an autumn full of contradictory signals. On one hand we see the rise in climate anxiety, geopolitical paralysis on the other, and a European political response which is both strong and weak.  The publication of the 6th IPCC report in … Continued

A Conversation With Frans Timmermans

Are we witnessing the birth of “war ecology”? Will the Kremlin’s use of gas as a weapon have an effect on perceptions of the transition and, more broadly, of European action? We must realize that Europe must be sovereign when it comes to energy and that our sovereignty can only be built on renewable energy. … Continued

“I am interested in Europe as an ecological problem”

What is Europe to you? I am not an expert on Europe, but I try to differentiate between Brussels-Europe — meaning the post-war system that linked European States — and what, in my opinion, represents 98% of what we report on Europe in the media and opinions, and this is the Europe that interests me. … Continued