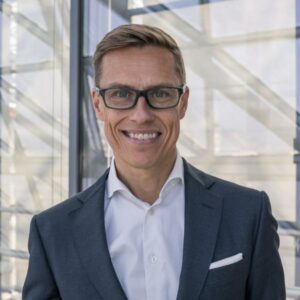 Alexander Stubb is a former Prime Minister as well as former Minister of Finance and Minister of Foreign Affairs of Finland.

Between 1995 and 2004, he was an advisor at the Finnish Ministry of Foreign Affairs in Helsinki and Brussels and within President Romano Prodi’s team at the European Commission where he participated in the negotiation of the Amsterdam, Nice and Lisbon treaties.

He currently serves as Director and Professor at the School of Transnational Governance at the European University Institute in Florence and was Visiting Professor at the College of Europe in Bruges between 2000 and 2007.

Mr. Stubb is the author of numerous books on the European Union and a regular contributor to European publications. He is considered an expert in the fields of European and international affairs, European and global economics, and foreign and national security policy.