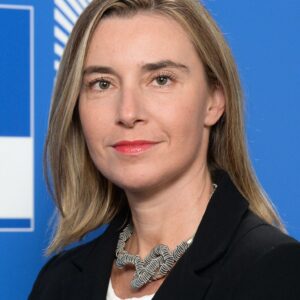 Former High-Representative of the European Union
Share this author page

Federica Mogherini is the Rector of the College of Europe and co-chair for the United Nations High Level Panel on Internal Displacement.

She is a Fellow at the Harvard Kennedy School and the German Marshall Fund, a member of the Board of Trustees of the International Crisis Group, a member of the Group of Eminent Persons of the Preparatory Commission for the Comprehensive Nuclear Test Ban Treaty Organization, the European Leadership Network for Multilateral Nuclear Disarmament and Non-Proliferation, and member of the Board of Directors of the Italian Institute for Foreign Affairs (IAI).

Ms. Mogherini holds a degree in Political Science from the University of Rome “La Sapienza.”