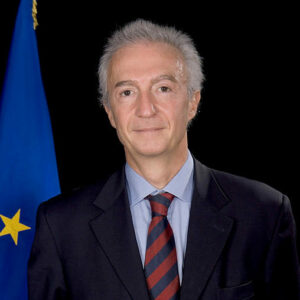 Mr. de Kerchove began his career with the European Commission in 1985 as an administrator in Directorate General IV for Competition. He was then chief of staff of the deputy prime minister and various ministries for the Belgian government from 1986 until 1995. He then served as director in the general directorate of Justice and Home Affairs (JHA) in the General Secretariat of the Council of the European Union from 1995 until 2007 and was Deputy Secretary of the Convention which drafted the Charter of Fundamental Rights of the European Union from 1999 to 2000. He has been in his current role as European Union Counter-Terrorism Coordinator  since 2007.

He received a law degree at the University of Louvain in 1979 and a Masters in Law from Yale Law School in 1984. Mr. de Kerchove has published a number of articles and books on European law, human rights, security and counter terrorism.