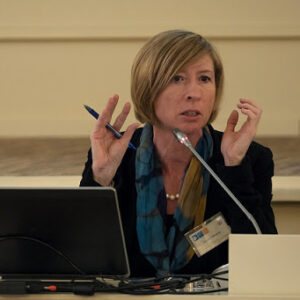 W.R Kenan Distinguished Professor of Political Science at the University of North Carolina at Chapel Hill
Share this author page

Liesbet Hooghe is the W.R Kenan Distinguished Professor of Political Science at the University of North Carolina at Chapel Hill and Research Professor at the Robert Schuman Centre for Advanced Studies at the European University Institute in Florence, Italy.

Her research focuses on comparative politics, multilevel governance, international organization and political behavior. Her work has been published in leading political science journals. Ms. Hooghe received a PhD in Political Science from the Catholic University in Leuven, Belgium in 1984. From 1989-1990, she was a Fulbright Postdoctoral Fellow at Cornell University, and a postdoctoral fellow at Nuffield College, Oxford from 1991–1994. From 1994-2000, she was Associate Professor of Political Science at the University of Toronto before taking a position at the University of North Carolina at Chapel Hill in 2000.

Professor Hooghe  has held fellowships at the European University Institute, Florence, the Wissenschaftszentrum at Berlin, the Hanse Wissenschaftskolleg in Delmenhorst, the Freie Universität Berlin, and visiting professorships at Sciences Po, Pompeu Fabra, and the Vienna IHS. In 2012, she was inducted as a Foreign Member into the Royal Flemish Academy of Belgium for Science and the Arts.

The European Commission as a political engine of integration

On May 27th, the GEG Weekly Seminar will discuss The European Commission as a political engine of integration, a conversation with Martin Selmayr and Frédéric Mérand