Seeking a Sustainable Capitalism Through Law 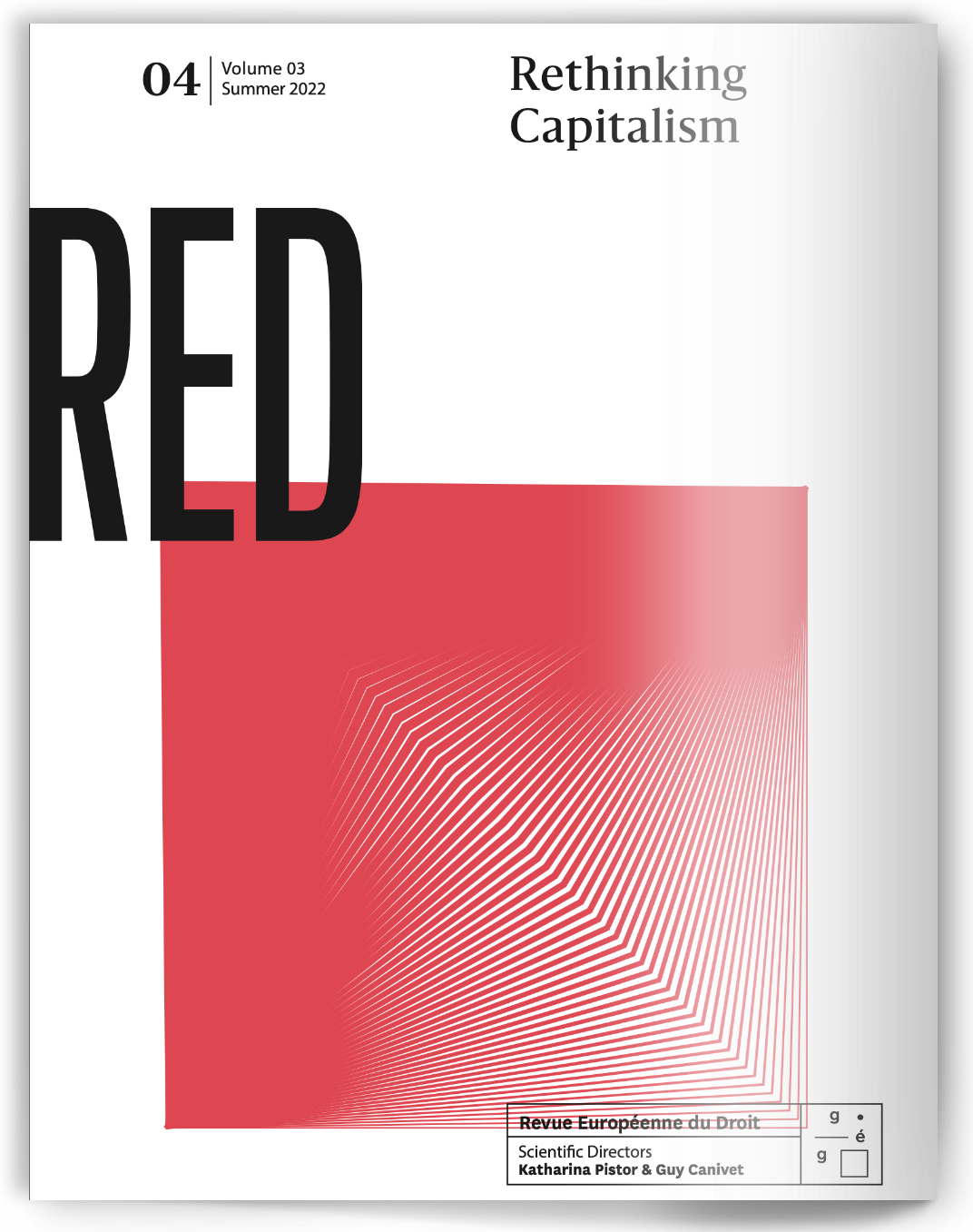 The deluge of recent legislative proposals and academic writings leaves no doubt: the call for a profound overhaul of capitalism is once again on the agenda. What makes the present moment unique is that the call is not only being heard in traditionally critical quarters, but also in the very bastions of liberalism. Multiple reasons come to mind: the concentration of capital in a few hands increases inequalities, the financial system has come close to cardiac arrest several times over the last years and had to be revived by an infusion of public funds, and climate and ecological disasters have become all but unavoidable.

Admittedly, capitalism is an ill-defined concept. It can be contrasted with socialism, or with the local and communal economy that preceded it historically. Either way, the law plays a major role in enabling and maintaining it, through the clear definition of property rights, the respect of contractual freedom, and the incentivisation of private entrepreneurship. From an ideological point of view, the great transformation of the system of production has been accompanied by what might be called capitalism’s ‘anthropological bet’: as in Mandeville’s beehive, the pursuit of private interests promotes the common good, while creative destruction supposedly drives societies towards ever better versions of themselves (see Aghion, pages 170-172).

In theory, many conditions need to be met for such a system to be ‘sustainable’: the existence of a competitive market, whose rules are set in a transparent and impartial manner; the absence of negative externalities, or, more precisely, society’s ability to redress them perfectly through regulations and taxation; and a fair redistribution of capitalism’s gains. But, as the crises and turmoil of the last twenty years show, these conditions are seldom perfectly met in reality. Against this backdrop, the role of the law in promoting a more sustainable capitalism gives rise to a renewed debate, which the authors of this new issue of the Revue européenne du droit, jurists, economists, and philosophers, set out to shed light on.

To overcome these crises, a first strategy is to confront directly the negative externalities generated by the pursuit of private interests, without abandoning the ‘anthropological bet’ underlying capitalism. Consider the climate crisis. A Pigouvian tax on carbon emissions and strict regulation of polluting activities could reduce the private gains of socially harmful activities (see Esty, pages 119-126), although this cannot be the end of the matter if a true sustainability transition is to be brought about (see Sachs and Sachs, pages 143-148; Sharpe, pages 149-156; Attali, pages 178-182).

But these initiatives are often politically costly, because they affect ordinary citizens disproportionately, and are subject to virulent lobbying campaigns by the businesses falling under their scope, thus failing to usher in fundamental change. Even when the least controversial of these measures get approved, the measures often win rhetorical battles without achieving significant substantive goals. Hence the temptation, faced with the urgency of the matter, to enlist the living forces of private law, substituting the courts for deficient or absent public policies (see Rochfeld, pages 135-142). The same is true of inequalities: the promise of a reasonable redistributive policy being often untenable, many seek to tip the scales of private law to redress unequal social relations (see Davis and Pargendler, pages 78-82), while waiting for fair long-term solutions to emerge (see Dagan, pages 73-77; Tcherneva, pages 90-98).

When these efforts fail to realise the conditions for a sustainable capitalism, the very idea that the pursuit of private interests promotes the public good seems to be undermined. Hence the initiatives in favour of a ‘responsible capitalism’ concerned with the common good, promoted at breakneck pace, albeit with varying degrees of success, by the European legislator (see Ringe and Gözlügöl, pages 127-134; Conac, pages 111-118). The aim is to change the way in which large companies are governed, the interests and purposes they are intended to serve, and to limit the social costs arising from their activities (see Henderson, pages 22-28). In this area, France is at the forefront of a global reform movement, particularly since the reform of its Civil Code and the enactment of the 2019 PACTE statute.

Indeed, while the relevance of cost-benefit analyses in a complex and unpredictable reality is questionable, being guided by unequivocal ethical principles is often a good business strategy (see Edmans, pages 9-13). But current legislative initiatives go far beyond this, to require, or at least facilitate, more ‘virtuous’ business conduct. Arising from the frustration of not being able to mitigate negative externalities, this second strategy takes aim at the profit motive itself.

But the attitude towards the role which the market is supposed to play in the transition to a more sustainable capitalism remains ambiguous. Sometimes the market is seen as an ally, for example when it allows investors to exert ‘virtuous’ pressures on irresponsible decision-makers (see Christie, pages 29-35), although this also undermines traditional democratic decision-making procedures in favour of those who own the capital (see Masconale and Sepe, pages 37-43). At other times, the market is distrusted, and attempts are made to ‘protect’ managers from its supposedly ‘short-termist’ pressures. The topic is a complex one and deserves a reflection on sound bases, drawing lessons from comparable experiences in foreign jurisdictions (see Puchniak, pages 14-21).

Law can also play a more subtle role in promoting a sustainable form of capitalism. The belief that underlies each issue of our journal is that law and its language are not irrelevant epiphenomena, but are constitutive of social and economic relations, and the power dynamics that they embody. If the accumulation of wealth is intrinsically linked to the way in which assets are ‘coded’ in the legal language, it is legitimate, once these mechanisms have been set out, to ask whether we recognise ourselves in the mirror that is thus put in front of us (see Pistor, pages 5-7). If private property is the fundamental concept underpinning the market economy, a proper understanding of its current shape and possible reconfigurations is an unavoidable step in any reformist endeavour (see Robé, pages 162-169; Dagan, pages 157-161). Finally, if one recognises that the substance of all economic activities ultimately consists of the labour of real men and women, it becomes critical to ask what type of human being the current labour law is shaping (see Pereira, pages 99-104), and what its horizon should be if the law is to bring about a more sustainable form of capitalism (see Barbara, pages 83-89).

One of the essential tasks of jurists in the public space is to shed light on the dynamics hidden in the shadows of the law and on the way in which legal concepts bring about and maintain the existing state of the world. The contributions in this issue engage in this task with great skill, as, we hope, our readers will agree.

A war economy at the service of an economy of life

By Jacques Attali, writer, president of the Positive Planet Foundation, president of the of Attali et Associés, Honorary member of the Conseil d’Etat Among all the threats that weigh today on our communities, we can name at least seven, in decreasing order of probability, without any chronological order, nor hierarchy of seriousness.  A climate crisis: … Continued

The last two years have been marked by an extremely dense literature inviting us to reinvent or rethink capitalism and, more broadly, our social models. What do you think the current crisis says about our economy and our social model? Covid-19 has pointed to a number of existing dysfunctions that affect capitalism as it is … Continued