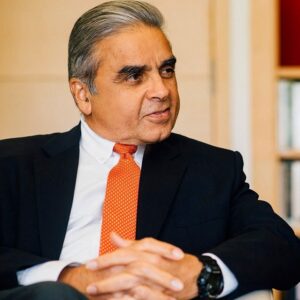 Kishore Mahbubani is Distinguished Fellow at the Asia Research Institute at the National University of Singapore. He is the former Dean of the Lee Kuan Yew School of Public Policy at NUS and also serves on the Boards and Councils of institutions around the world.

Kishore Mahbubani served as a diplomat serving the Singapore Foreign Service from 1971 to 2004, beginning with postings in Cambodia, Malaysia and the United States. Between 1993 and 1998, he was Permanent Secretary for Singapore’s Ministry of Foreign Affairs. He then served as Singapore’s Ambassador to the UN and as president of the UN Security Council in both 2001 and 2002.

Following his diplomatic service, Kishore Mahbubani was Founding Dean of the Lee Kuan Yew School of Public Policy as well as Founding Director and the first Dean of the Civil Service College in Singapore and has held appointments at Columbia University, Harvard University and Fudan University. The Financial Times has named him as one of the Top 50 people who will shape the debate on the future of capitalism.