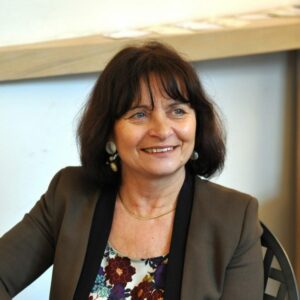 Nadia Urbinati is the Kyriakos Tsakopoulos Professor of Political Theory at Columbia University.

She is a political theorist specializing in modern and contemporary political thought and the democratic and anti-democratic traditions. She has published numerous works including Me The People: How Populism Transforms Democracy (2019) and Democracy Disfigured: Opinion, Truth and the People (2014).

Nadia Urbaniti holds a Ph.D. from the European University Institute in Florence, Italy. She has been a member of the School of Social Sciences of the Institute for Advanced Study and a Laurance S. Rockefeller Visiting Fellowship in the University Center for Human Values at Princeton University. She is permanent visiting professor at the Scuola Superiore de Studi Universitari e Perfezionamento Sant’Anna of Pisa, and taught at Bocconi University in Milan, SciencesPo in Paris, and the University UNICAMP in Brazil.

She received the Lenfest/Columbia Distinguished Faculty Award in 2008-2009 and was made Commendatore della Repubblica (Commander of the Italian Republic) “for her contribution to the study of democracy and the diffusion of Italian liberal and democratic thought abroad” in 2008. Her book Mill on Democracy received the David and Elaine Spitz Prize as the best book in liberal and democratic theory published in 2002.