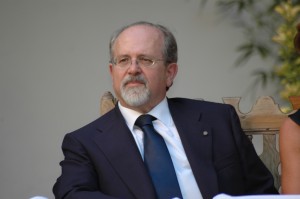 Luis Arroyo Zapatero (born in Valladolid in 1951), is a Spanish jurist, specialist in international criminal law, president of the International Society of Social Defense, and founder and current director of the Institute of European and International Criminal Law. He is Honorary Rector of the University of Castilla-La Mancha, of which he was the founding Rector. He is also a Corresponding Member of the Academy of Moral and Political Sciences of the Institut de France since 2019