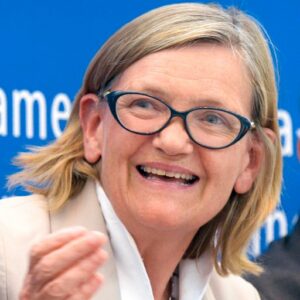 Professor Laffan’s career has spanned over three decades, beginning with a position as Research Co-ordinator on a project on regional integration at the College of Europe in Bruges in 1976. She has subsequently held posts as a Lecturer at the University of Limerick, at the Institute of Public of Administration (IPA) in Dublin, and at the School of Politics and International Relations (SPIRe) at the University College Dublin (UCD). From 1999 to 2004, she was founding director of the Dublin European Institute UCD. From 2004 until 2011, she was Vice-President of UCD and Principal of the College of Human Sciences. She has held her current position at EUI since 2013.

Her research focuses on the dynamic of European integration and particularly differentiated integration. She has published 10 books and over 35 journal articles and been the recipient of numerous awards and recognitions including the Chairman’s Award for Distinguished Graduates from the University of Limerick in 1991, being elected Member of the Royal Irish Academy (RIA) and in 2010, the Ordre nationale du Mérite from the President of the French Republic, and the Lifetime Achievement Award for contribution to the development of European Studies in 2014 by the UK Association for Contemporary European Studies (UACES). She has been ranked among the women who shape Europe by POLITICO. She is a founding member of the Institute for International and European Affairs (IIEA) in Dublin.

Can Europe Speak the Language of Power?

On March 31st, the GEG Weekly Seminar will discuss Europe's relationship with the notion of power and its ability to speak the language of power politics. The starting...