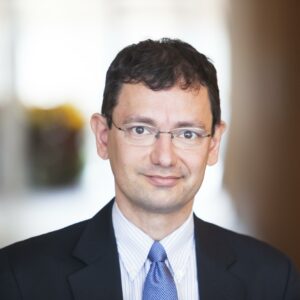 Nicolas Véron is a senior fellow and co-founder at Bruegel. He is also senior fellow at the Peterson Institute for International Economics in Washington, DC.

Nicolas Véron, an economist, has been active in both the public and private sectors, serving as corporate adviser to France’s labor minister between 1997 and 2000, as chief financial officer of Lycos France from 2000 – 2002, as an independent financial services consultant, and as board member of the derivatives arm of DTCC (the Depository Trust and Clearing Corporation), a global financial infrastructure company since 2013. Bloomberg Markets has included Véron in its second annual 50 Most Influential list for his advocacy work of the European banking union.

He regularly publishes research on financial systems and financial reform, global financial regulatory initiatives, accounting standards, economic nationalism, and current developments in the European Union, among other topics. In addition, he is coeditor of Transatlantic Economic Challenges in an Era of Growing Multipolarity (2012) and coauthor of Smoke and Mirrors, Inc.: Accounting for Capitalism (2006).

He is a graduate of the Ecole Polytechnique and the Ecole Nationale Supérieure des Mines in Paris.