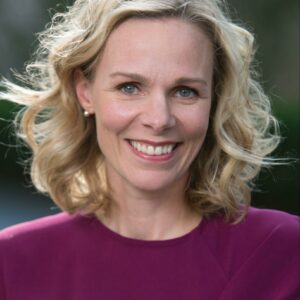 Bradford is also an expert in international trade law and antitrust law. She spearheads the Comparative Competition Law Project, which has built a comprehensive global data set of antitrust laws and enforcement across time and jurisdictions. The project, a joint effort between the Law School and the University of Chicago Law School, covers more than a century of regulation in over 100 countries and has been the basis for Bradford’s recent research on the antitrust laws used to regulate markets.

Before joining the Law School faculty in 2012, Bradford was an assistant professor at the University of Chicago Law School. She also practiced EU and antitrust law in Brussels and has served as an adviser on economic policy in the Parliament of Finland and as an expert assistant at the European Parliament. The World Economic Forum named her Young Global Leader ’10.

At the Law School, Bradford is the director of the European Legal Studies Center, which trains students for leadership roles in European law, public affairs, and the global economy. She is also a Senior Scholar at Columbia Business School’s Jerome A. Chazen Institute for Global Business and a nonresident scholar at Carnegie Endowment for International Peace.

The European Union in a globalised world: the “Brussels effect”

There is a general feeling, at least outside of the EU, that it is becoming increasingly irrelevant from most points of view. On the other hand, in your latest book, you claim that the EU remains an influential superpower that shapes the world in its image: it is actually the only global regulatory superpower, due … Continued