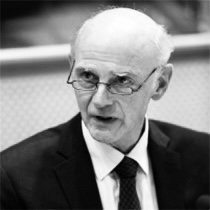 Peter Chase is currently a Senior Fellow with the German Marshall Fund in Brussels, where he focuses on transatlantic and international economic policy issues, including in particular with respect to trade, investment, regulatory cooperation and digital policy issues.

He became a full-time resident at GMF in May 2016, after leaving the U.S. Chamber of Commerce, where he had been for six years its Brussels-based Senior Representative in Europe; he was Vice President for Europe between July 2012 and his departure in February 2016.

After joining the Chamber in April 2010, Mr. Chase played a critical role in the Chamber’s campaign to launch U.S.-EU negotiations toward an ambitious free trade agreement, including funding an initial study to demonstrate the benefits of merely eliminating tariffs and helping convince the European business community to support the effort; this led to the formal launch of the Transatlantic Trade and Investment Partnership (TTIP) talks in July 2013. Mr. Chase is widely recognized for his expertise on virtually all aspects of the proposed agreement, including in particular the regulatory and investment issues. He has also led much of the Chamber’s work in Europe on energy, capital markets regulation, digital policy issues and EU economic relations with third countries, notably China and Russia.

Following four years of tumultuous transatlantic trade relations under President Trump, the Biden Administration is taking important, but cautious, steps to improve U.S.-EU economic ties.  These steps, including the creation of the U.S.-EU Trade and Technology Council, bring a new focus to transatlantic regulatory cooperation, in a way that thankfully has not (yet) elicited the … Continued

Anda Bologa : We look forward to hearing your views – those of a former U.S. diplomat and vice-president of the U.S Chamber of Commerce for Europe – on privacy, data protection, the GDPR and the European Court of Justice rulings on Privacy Shield, as well as the broader issue of global data governance. The basic … Continued