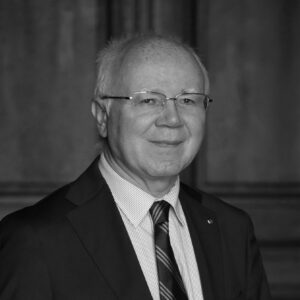 Vice-President of the Conseil d’État

Bruno Lasserre holds a degree in political science from the Bordeaux Institute of Political Studies (1974) and a law degree from the University of Bordeaux (1975). After graduating from ENA, Bruno Lasserre joined the Conseil d’État where he served as rapporteur for the litigation section (1978-1981), head of the documentation and legal research center (1981-1984), and then as public rapporteur, then called government commissioner (1984-1986).

After eight years at the Conseil d’État, he joined the Ministry of Post and Telecommunications in 1986, where he became director of general regulations in 1989, in charge of regulating a sector in full swing, before taking on the role of director general of post and telecommunications from 1993 to 1997.

During his eight years at the helm of the telecommunications regulatory authority, he was the principal architect of the overall reform of the sector, which resulted in its opening to competition, the establishment of an independent regulatory authority and the privatization of the incumbent operator.

At the same time, he was a member of the College of the Competition Council from 1998 to 2004, before becoming its Chairman on July 28, 2004, a position he retained after the Council’s transformation into the Competition Authority by the Law on the Modernization of the Economy (LME) of August 4, 2008. This independent authority, which he headed for twelve years, is responsible for implementing competition law and policy in France.

In October 2016, Bruno Lasserre returned to the Conseil d’État as president of the interior section in charge of examining bills and decrees on subjects relating, in particular, to internal security, public liberties, local authorities, asylum and immigration, the media, education, culture and sports.

At the same time, in April 2017, Bruno Lasserre was appointed Chairman of the Dispute Settlement and Sanctions Committee of the Energy Regulatory Commission, a position he held until September 2018.

He is the author of several reports commissioned by the Prime Minister: “L’Etat et les technologies de l’information : vers une administration à accès pluriel” (La documentation française, 2000) and “Pour une meilleure qualité de la réglementation” (La documentation française, 2004). He has also published a book devoted to “La transparence administrative” (PUF, 1986, in coll. with M. Bernard Stirn and Mme Noëlle Lenoir). He was also a member of the Commission for the Liberation of French Growth chaired by Mr. Jacques Attali, whose report (“300 decisions to change France”) was submitted to the President of the Republic and the Prime Minister on January 23, 2008.

National Courts and the construction of Europe: United in diversity

The decisive role played by the CJEU of the European Union (CJEU) in European integration is often, and rightly, highlighted. As Walter Hallstein, the first President of the Commission of the European Economic Community, wrote, the Community, and henceforth the Union, has “no direct power of coercion, no army, no police. Its only instrument, its … Continued