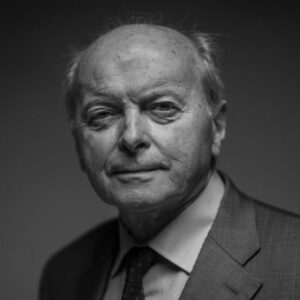 Former French Minister of Justice and Defender of Rights, President of Collegium International

Jacques Toubon was Minister of Culture and Minister of Justice between 1993 and 1997. He was also the Defender of Rights between 2014 and 2020.

Jacques Toubon was Minister of Culture and Minister of Justice between 1993 and 1997. He was also the Defender of Rights between 2014 and 2020. He is President of the Collegium International, a network in operation since 2002, created at the initiative of Michel Rocard, Milan Kučan, Stéphane Hessel and Sacha Goldman. Bringing together men and women from the fields of philosophy, science and the arts, as well as high-level leaders and politicians, its work is oriented towards the creation of a new doctrine of global governance. At the instigation of the United Nations Office in Geneva, the Collegium proposes to create, in collaboration with the IHEID, a Charter to connect the different components of a fragmented and disintegrated multilateral system, in order to address the current impasse of a world thrown into a maelstrom of growing crises.

Europe is Sleepwalking in an Unsustainable and Fragile World

Jean-Yves Heurtebise: In its blind march towards the abyss, there is nothing more than a thin layer of ice standing between mankind and nothingness in a world that struggles to support our weight. The new epistemological, epidemiological, and energetic state of crisis makes reflection an urgent need. It is an ever-growing emergency in the face … Continued